FOUGÈRE: a French noun meaning fern.
There are 5 known Fugère/Fougère families in North America.  Today, only 4 exist.
Here is a brief history of each, in the order that they arrived:
(Click on any underlined name to go to that person in my tree)

PIERRE FOUGÈRE-FUGÈRE: Pierre was born about 1676, in the village of Verrières, near Cognac, France.  His parents were Simon Fougère and Anne Jantay.  Pierre arrived to Nouvelle France (Canada) about 1699.  He settled on Île-d'Orléans, where he married Madeleine Verieul 26 Nov 1703.  Pierre and Madeleine had 11 children, all but 4 surviving to adulthood and marrying.  Of the four who died, two were 18 and 30, and the other two were infants when they died.  Current descendant count: 32646 (Apr 2014)

JEAN FOUGÈRE:   May have arrived in North America at roughly the same time as Pierre, though the first signed evidence of him here is in 1709.  He was the son of Jean Fougère and Marie Barre, of Poupry, France, born 11 Jul 1684.  Jean made his home in Acadie, that part of Canada now known as Nova Scotia and New Brunswick.  Initially, the family settled at Port Royal (Annapolis Royal), then moved as trouble was encountered. He married Marie Bourg in Port Royal on 27 November 1713, and after her death, Madeleine Belliveau, fathering 18-19 children across the two marriages.  There are descendants of this family who adopted the surname FRAZIER or FRASIER.  This is my least researched line.  See Ron Frazier's research here.
Jean Fougère² (Jean Fougère¹ & Claudine Burbier) & Marie Barré (Robert Barré & Marguerite Pidault) & were married 12 Jul 1681 at Poupry.
Jean Fougère³ was born 11 Jul 1684 at Poupry. He had a sister Marie, born on 12 Jul 1688.
Jean Fougère² died 10 May 1688 at Poupry. Marie Barré reportedly died in 1689, but that year is missing from the online archives.  With both parents deceased, it is more than likely that they were taken in by relatives, or raised by the church. I can provide copies of the acts, or links to them for anyone interested.

EDMÉ FUGÈRE dit CHAMPAGNE: Edmé, or Aimé, Fugère was from near Troyes, France.  He was born about 1705, and his parents were Nicolas Fugère and Anne Cusson.  Since Pierre's family was well-established upon his arrival, Edmé adopted the "dit Champagne" moniker to differentiate his family from Pierre's, even though he lived in Repentigny, and the families wouldn't have run into each other much.  Troyes lies in the historical province of Champagne, which explains his selection of the name.  Edmé married Marie-Thérèse Leriche on 17 Sep 1736.  They had 10 children, half of whom died in infancy.  There is a branch of this family, that upon emigrating to the US, changed their last name to FISHER.  Current descendant count: 1474 (April 2014)
(Historically, he was said to have been from Pontoise, but it's nearer to Paris than to Troyes)

MICHAEL FUGÈRE: Michael William Fugère, also known as Michel, was born in London, England to French parents in 1913.  His father, Moise-Désiré Fugère, was a competitive bicyclist, at least for a time.  His mother was Louise-Denise Prin.  Michael emigrated to Canada in the summer of 1930, settling at Markdale, Ontario and enlisting in the Royal Canadian Air Force. He married Margaret Shelton-Bell shortly after his arrival in Canada, and they had  3 children.  He was on mission over the Isle of Wight when the plane developed catastrophic engine failure.  All 6 crew aboard perished, 20 Dec 1942.  He is buried in Hampshire, England.
His family can be found in Ontario and Alberta.  Current descendant count: 44

LOUIS ANNIS dit FUGÈRE: Louis was born 13 Mar 1720 in Saint-Quentin-lès-Beaurepaire, to René Annis and Anne Aubry.  He married Marie-Charlotte Cantin in Québec about 1762.  They lived at Maskinongé.  They had only three children - Louis, Charlotte, and Louis - none of whom survived childhood.

Others carrying the name Fougère or Fugère in Québec: many were military or government officials who did not remain in Québec, and did not have families in Québec.
PIERRE NOLIN dit FUGÈRE married in Québec in 1653, but died in 1659, having had no children. He was from Longeves, near La Rochelle.
THOMAS FUGÈRE: from Lisieux
ADRIEN BLANQUET dit (LA)FOUGÈRE: b. 1605 from St-Vaast in Ocqueville in Normandie.
NICOLAS FUGÈRE dit DESPATIS
FRANCOIS DUGUE dit FOUGÈRE: Lt. Col. in the CURTI regiment
JACQUES DUGUE dit FOUGÈRE: Son and father were apparently in QC, each appearing as witnesses on different acts
CHARLES BELONQUE dit FUGÈRE: from Ecrainville, near Rouen.
JEAN TRICHAUX dit FUGÈRE: in hospital records in 1692. From Luçon.
BERNARD FUGÈRE dit PARISIEN: soldier in the company of M. de Meloisse when recorded at the hospital in 1693. Died in 1725, aged 52, when he was recorded as a corporal in the company of M. Delignery. From La Brovier.

Jan 2014: I just discovered a Pierre Fougère/Faugère who was a Huguenot.  He was in the Frenchtown, RI settlement, marrying Anne Jaulin/Jolin in May 1688.  Their son Pierre was baptized there the following March, and a daughter, Isabeau, was born in March 1691, and baptized at the Huguenot church in NYC in 1694.  I've contacted the Huguenot Society of America to find out the disposition of this family, as searching online didn't turn up anything other than what I have here.  He is not listed on their manifest of ancestors.

I'm happy to help with any genealogical inquiries.  Please see the Contact page 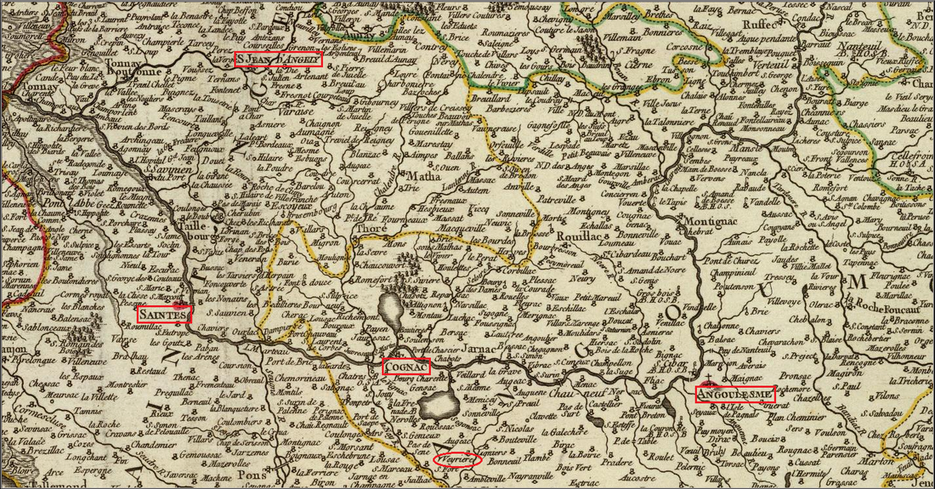 Origins: Pierre Fougère was from the small village of Verrières, in the province of Angoumois, France.  The map, from 1753 (long after Pierre left), shows the spelling as VEYRIERE (center bottom).  It is to the south of Cognac, centered between Saintes & Angoulême.  The yellow line is the dividing line between the provinces of Saintonge and Angoumois.  The red line to the left is the border of the province of Aunis, and the green border to the north is the border of the province of Poitou.  La Rochelle is just out of the screen-shot in the NW.
Map from David Rumsey Historical Map Collection. 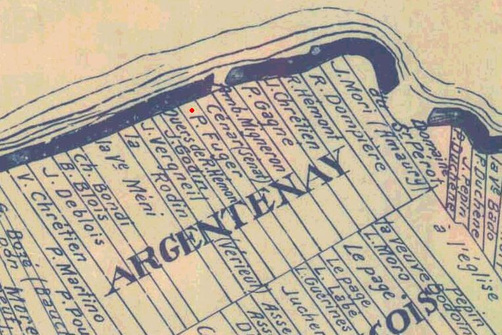 Pierre lived his life in Nouvelle France on the Isle of Orléans.
This map shows the plot of land that he owned on the N side of the island.

Approximately where that plot of land is today 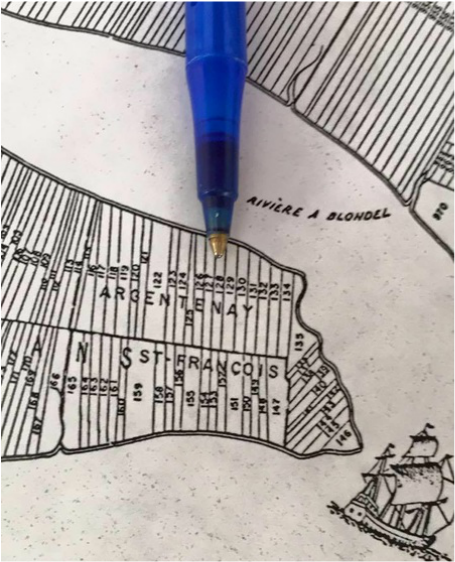 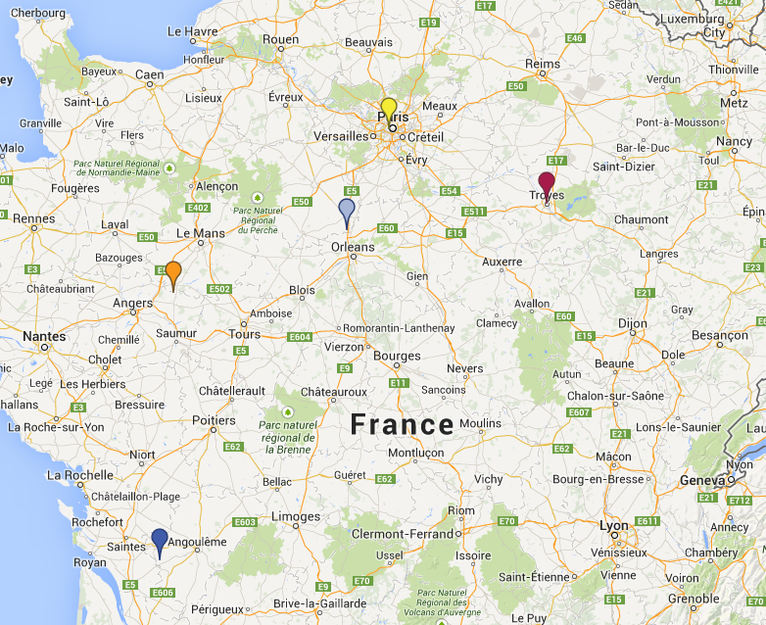 This map of France shows the origins of the families:

This image shows where each Fugère man settled at in Canada.
Pierre: Verrières, FR to St-François, Ile-d'Orleans, QC
Edmé: Troyes, FR to Répentigny, QC
Jean: Poupry, FR to Port Royal, Acadia
Louis: St-Quentin-les-Beaurepaire to Maskinongé, QC
Moise: Paris, FR to London (not shown) and Michael: Owen Sound, ON
You can explore this map by clicking on it.
Powered by