(Somewhere about 2013...)
One of my many weird obsessions is Sharpie permanent markers. As a crafty/creative person who loves to paint, draw, and doodle, you just can't beat Sharpies (and crayons) for variety and fun. Earlier this year, I made it my mission to acquire every color of Sharpie I could find.
All product images are copyright of their respective owners and are used here for demonstrative purposes only. No infringement is intended.

Some of the dates below could be off by 1 year, 2 at most. I'm working from archived pages of the Sharpie site. Sometimes a specific year is mentioned in a feature of the website called "Did You Know." If no specific year has been located, I use the year the product appeared on the Sharpie site (which didn't exist until 2003),
or the copyright date on the product if I own it or can find an image of it.

1964: Sanford introduces the first pen-style marker, the Sharpie. It comes in one color, black, and one tip size, Fine.

1965: Sharpie expands the Fine Point colors to include Purple, Blue, Green, Yellow, Orange, Red, and Brown. A "Did You Know" on an archived version of Sharpie.com stated 1979. A 1965 Sanford catalog proves otherwise.

1979: Sharpie introduces the Extra Fine tip. It was available in black, blue, green, and red. This product has been discontinued. 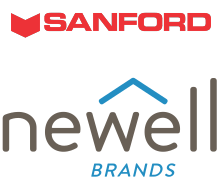 1990: Sanford and it's brands are acquired by the Newell Company. [Some sources give 1992. Newell Co became Newell-Rubbermaid after Rubbermaid was purchased by Newell Co in 1999]

1999: Sharpie introduces the Twin Tip marker. It has a Fine Point tip on one end, and an Ultra Fine Point tip on the other end. Available in the standard colors.
2000: Sharpie introduces the Liquid Sharpie marker. Offered in black, blue, and red, the ink is visible thru the clear plastic barrel.
Also sports a rubberized grip. This is the basis of the Grip pen introduced in 2002/2003, without the see-thru barrel.
This product has been discontinued. 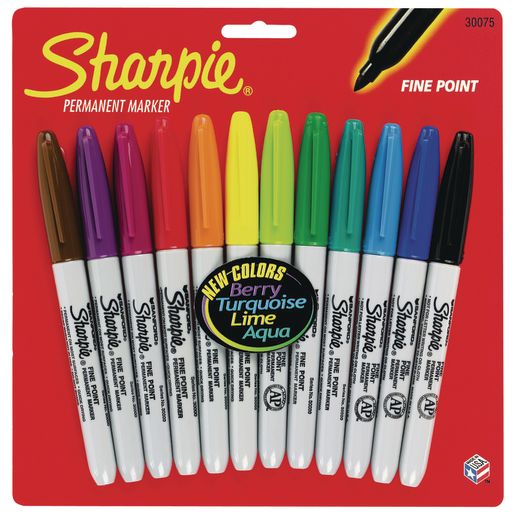 2001: Sharpie adds colors Aqua, Berry, Lime, and Turquoise to the core line up, bringing the color total to 12.

2002: With the introduction of the Chisel Tip, Sharpie combined a Chisel Tip and Super Sharpie! The Super Twin Tip has a Fine Point on one end and a Chisel Tip on the other, with the extra ink capacity of a Super Sharpie. Available in black, blue, and red.

Introduced in 2002, Metallic Silver reigned supreme for a decade before other metallic colors were introduced! Do you know what metal makes this Sharpie metallic? Hint: It's not Silver!

Pre-2003: Sharpie Industrial Fine Point. Formulated for lab and professional use. Stable up to 500°

Pre-2003: Sharpie introduces Grip, a Fine Point marker with a rubberized grip for comfort handling (grip along the barrel was added later, see below). Offered in 8 colors - berry, black, blue, green, lime, orange, red, and turquoise. At some point it is redesigned and the barrel is see-thru, like the Liquid Sharpie. 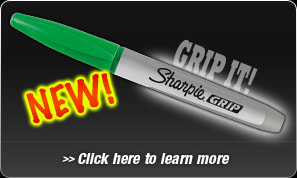 2007: Redesigned: Same great Sharpie with a unique comfort grip along the entire barrel that allows for increased control while marking

2003: Sharpie Professional (or PRO) features an extra-durable tip for use on abrasive surfaces, a non-slip barrel, and an easy-to-remove cap.

Introduced in 2004, the CD/DVD marker was a Twin Tip that was safe for marking on the top side of CDs and DVDs. Black, blue, green, red. This product is discontinued.

2004: Touch-Up markers in three shades, for fixing nicks and dings on wood. This product is discontinued.
Sharpie Paint markers were introduced in 2004 in 4 tips and two bases - water and oil.
Water-based aka Poster Paint markers

Bold, in 5 colors
The following items were added to the Sharpie site in 2004 but were likely introduced much earlier under Sanford.

2005: Sharpie introduces the Mini. Comes with a built-in bail for easy addition to a key-ring, so you can take your Sharpie Mini anywhere! Offered in 25 colors over time, as of 2020 Sharpie seems to have pared production back to black, blue, green, and red.

2002-2005: Sharpie adds 12 new colors to the existing 12, for a grand total of 24 colors! Magenta and Tangerine are added to the core colors. 2003 is the introduction of Limited Edition color sets. 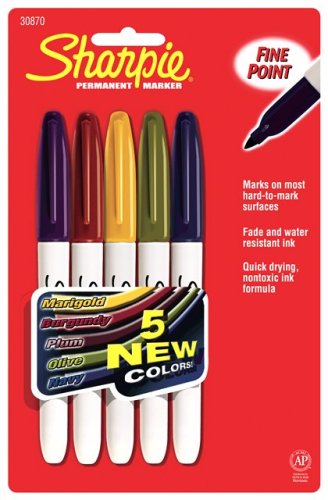 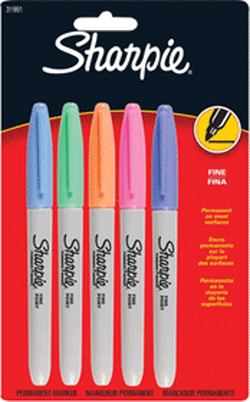 2006: Sharpie continues it's expansion of markers with the introduction of the Micro. Whereas the Mini is Fine Point, the Micro is Ultra Fine Point. The Micro was available in 12 colors. This product has been discontinued. 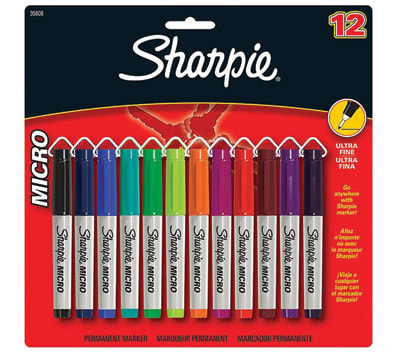 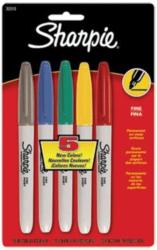 Earth Tones: Slate Grey, Ocean Blue, Spruce Green, Dandelion, and Brick Red. Slate makes it to the core lineup, though it's color will be changed from a muddy grey-brown to a truer grey. The cap color also changes. 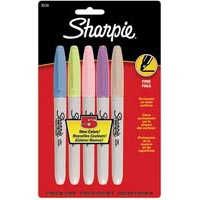 Summer Splash: Blue Ice, Kiwi, Pink Lemonade, Boysenberry, Almond. All of the colors made it to the core lineup except Kiwi.
It should be noted that these colors can all be found in Ultra Fine as well. Up until this point, Ultra Fine caps had a metal clip.
Summer Splash is the last set with metal clips. Wild Flowers is the first set with an all plastic cap. 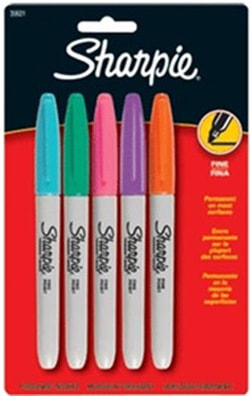 2007: Sharpie introduces the Retractable marker in Ultra Fine. 12 colors have been produced. 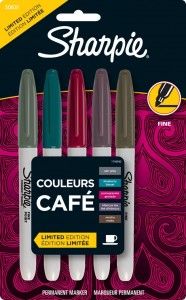 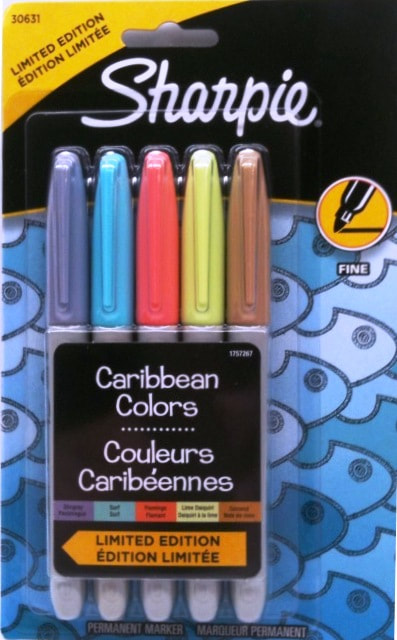 2011: Stained by Sharpie is introduced. Brush tip markers meant for use on fabric, in 8 colors

2011/2012: Sharpie introduces Metallic Gold and Metallic Copper, with the old elongated arc design. By summer 2012, when the new metallics were added to the Sharpie website, Sharpie had switched to the design pictured here, and renamed Metallic Copper to Metallic Bronze. 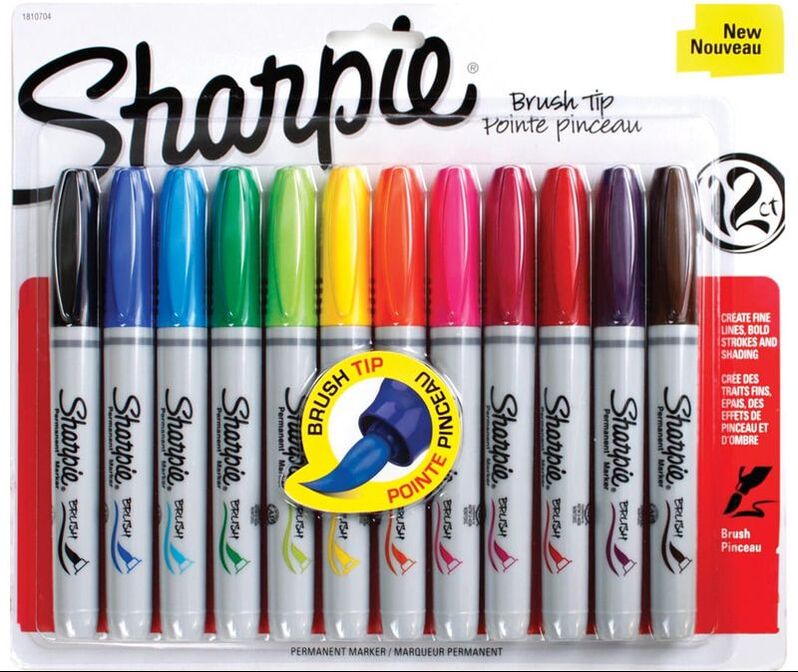 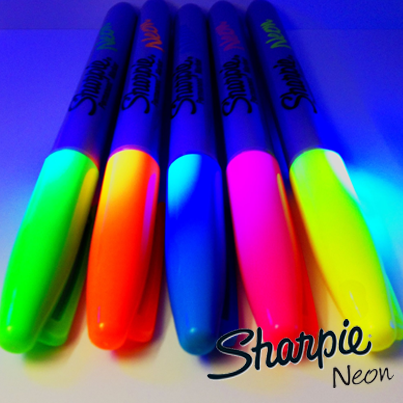 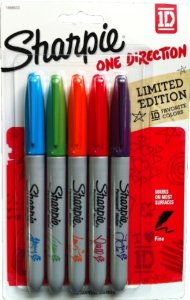 2013: Limited Edition One Direction (1D) set. No new colors, just the favorite color of each member, along with their signature. Turquoise, Argyle Green, Orange, Red, Purple
2014: Marks the 50th Anniversary of the Sharpie marker. Sharpie launches the "Sharpie 50 Ways" campaign. Launches Sharpie50Ways.com, where consumers can get a free sampler kit, consisting of 1 each of ever Sharpie product. Launches Special Edition packs, but doesn't issue any new colors in conjunction with the anniversary. 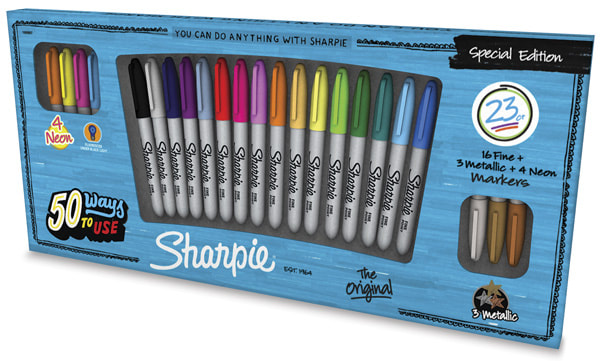 **Of interest here are the metallics. Modern metallics DO NOT have cap clips, as they are meant to be stored tip down. Early Silver markers (with the word "Metallic" in a black oval) do have a cap clip 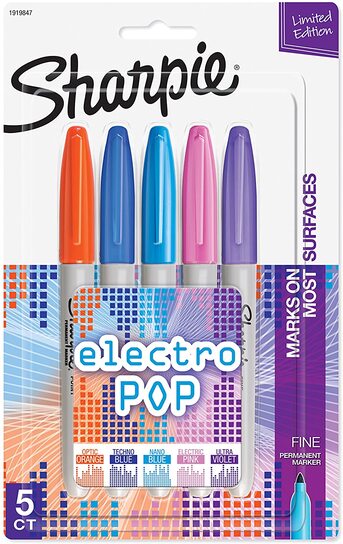 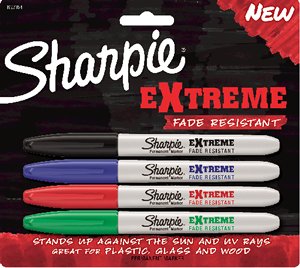 2015: Sharpie Extreme is introduced. New ink formula that stands up to UV rays and sun exposure better than before. Four colors 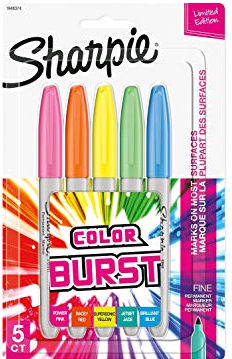 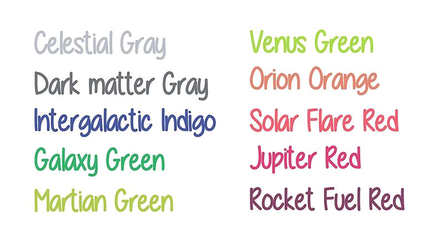 2018: Sharpie redesigns the Professional line and re-brands it as Sharpie PRO.
Ribbed grip, anti-roll,  with new ink formulated to mark on wet, oily, dusty, and abrasive surfaces. The cap has a lanyard loop.
Black, blue, red. 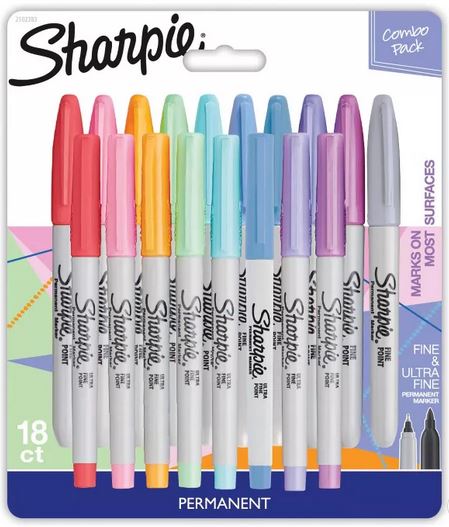 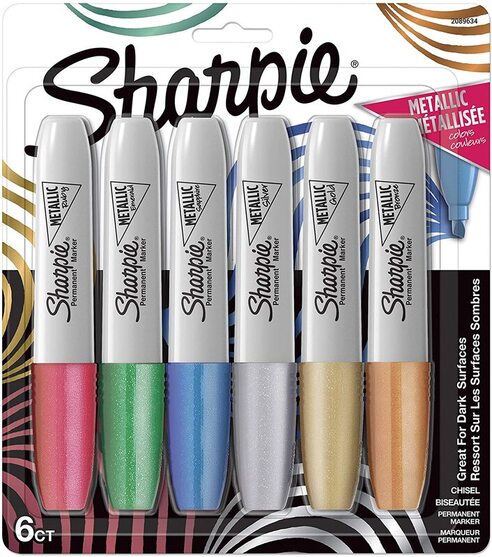 2020: Spring also sees the release of the Metallic colors in Chisel tip. 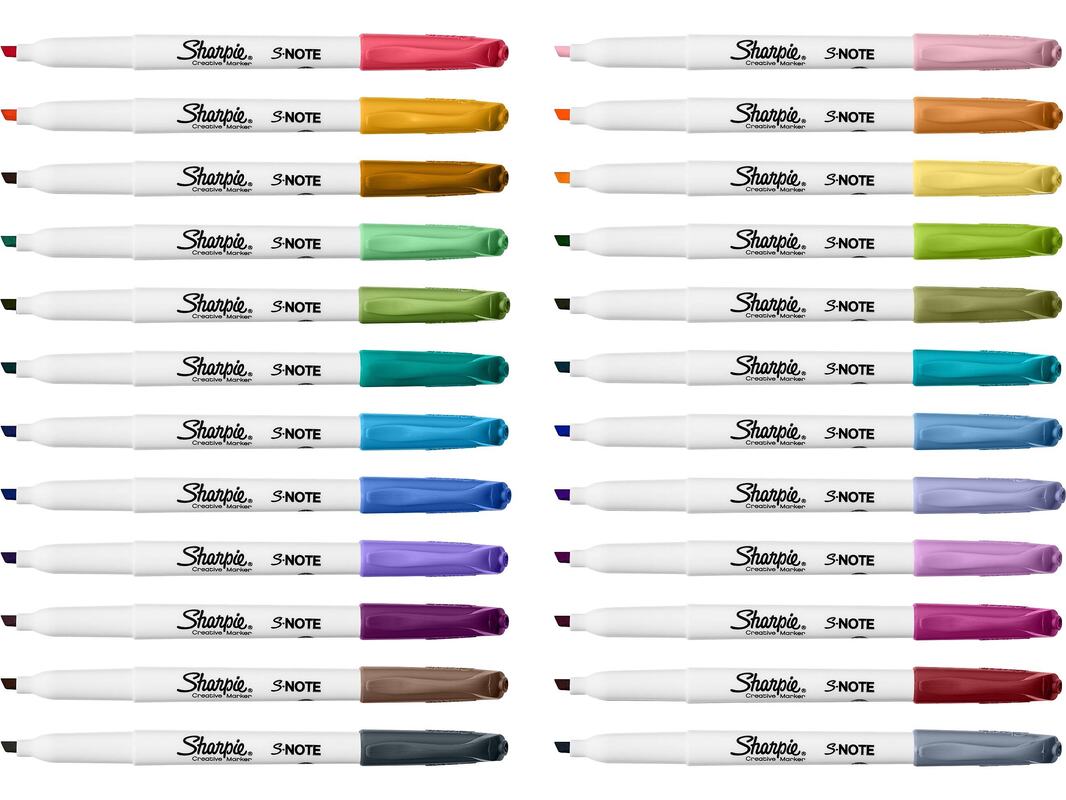 COLORS: You stopped by just to see how many colors there are, didn't you? And here I went and changed everything on you :)
The official Sharpie list of colors for the Fine Point marker is 86; for the UFP marker there are 75, as there are no neon or metallic.
Here is that list, in alphabetical order:

However. If you are any sort of Sharpie enthusiast, you know that sometimes a purple pen is just not the SAME purple pen. For whatever reason, Sharpie occasionally changes the color of their inks. There is also a working theory about ink degradation over time.
So, purple pen, right?

Every single one of these ink swatches is a Purple pen in my collection. We've taken to numbering them, and giving them secondary names. Purple 1 is Royal, Purple 2 is Amethyst, Purple 3 is Merlot, and Purple 4 has several names. The polite name is Magenta-in-Purple. The ink appears to be Magenta, but when swatched next to Magenta, is actually a different color.
We love you, but .... "DAAAAMMMMNNN YOU, SHARPIE!!!"
So, my Sharpie group (see link at bottom of this section; when I say "we," this is who I'm referring to) has started compiling
a list of variations. To qualify for the list, more than one person has to have the color, and it should be identifiable in
both Fine Point and Ultra Fine Point. As of 09 Sept 2020, there are 23 variations, with three others waiting for validation.
Green 3, Navy 3, and Plum 3 are awaiting validation by a second collector.

This list is extremely fluid and seems to change weekly, sometimes daily.
For the latest discoveries, join my Facebook group, Sharpie Addicts Worldwide

Introduced in 2008, Sharpie Pen was originally available in black, blue, green, and red. Two more colors were introduced in 2010, and another four in 2011. 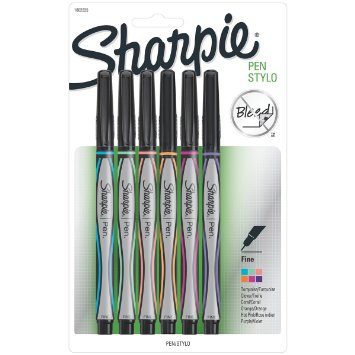